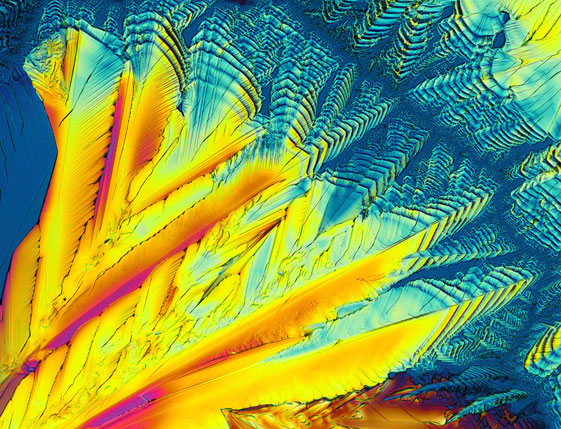 Micrographic image of Q10 crystalsCoenzyme Q10, also referred to as ubiquinone 10, is a member of the ubiquinones. This concerns methylated benzoquinone derivatives with isoprenoid side chains, which are structurally related to other natural lipophile substances like vitamin K and E.

Depending on the number of isoprene units, a choice is made between the coenzyme W forms 1 to 10. Ubiquinones are widespread in the animate natural world, which gives the class of substance its name (lat. ubique: everywhere). Ubiquinones are found in many foods accordingly. While foods of animal origin, including offal, meat and fish predominantly contain coenzyme Q10, foods of animal origin usually contain ubiquinone forms with a lower number of isoprene elements. Only Coenzyme Q10 is of significance in the human body. In terms of nutritional physiology, the natural substance belongs to the group of vitaminoids. These are active ingredients with vitamin-like effects.

The high concentration of coenzyme Q10 in tissues with a high metabolic rate and mitochondrial density, including the heart and liver, indicates the importance of the natural substance for the energy metabolism of the cells. Here, the oxidised form of coenzyme Q10, ubiquinol (Q10ox), can transition in a two-stage reaction via the intermediate stage of ubisemiquinone into the reduced form ubiquinone (Q10red). This redox characteristic substantiates the biological significance of the natural substance for the human body. As a coenzyme, it transfers electrons in the respiratory chain from the reduction equivalents originating from the breakdown of main nutrients in the form of NADH + H+ to oxygen. The energy which is released is used for the formation of ATP, the body's universal energy currency. Coenzyme Q10 works closely here with the vitamins B2 and niacin as well as the trace element iron and the mineral magnesium which contributes towards normal energy metabolism of the cells.