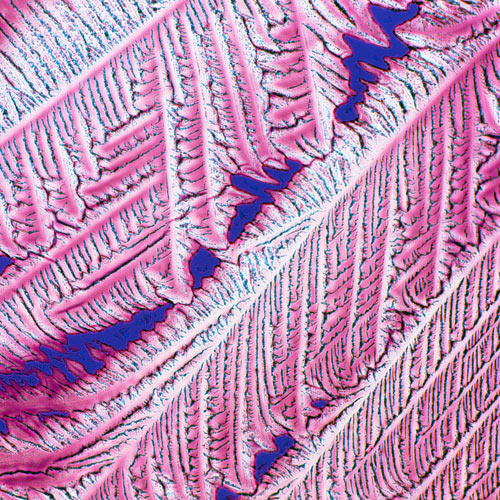 Iodine crystals under the microscopeIodine (chemical symbol I) belongs to the group of halogens. In the inanimate natural world, it is found as a component of rocks in the form of iodates (IO3-) and iodites (I-). Under the influence of rain water, it enters rivers and, from there, seas – the world's largest natural iodine store. A very good source of iodine for people and marine fish, seafood and algae in which it is predominantly found in the form of iodide.

The total adult body's store of iodine fluctuates between 10 and 20 mg. Roughly half of this is found in the thyroid. The rest falls to the musculature, mammary and salivary glands as well as the stomach lining. The physiological significance of iodine relies upon being involved as an essential component of biosynthesis of the thyroid hormone triiodothyronine (T3) and tetraiodothyronine (T4). Iodine thus contributes to the normal production of thyroid hormones and to normal thyroid function. The thyroid hormone itself regulates numerous bodily functions. This includes: